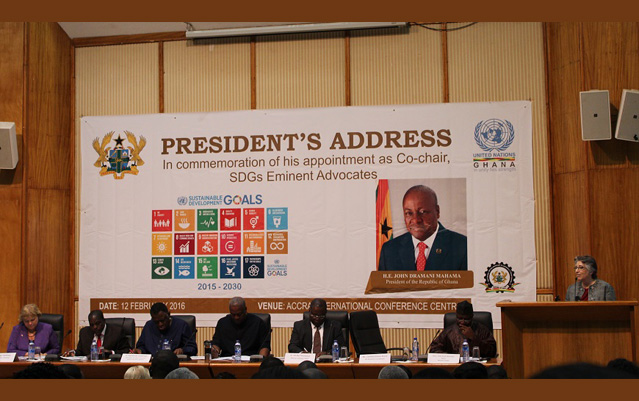 At the launch, several political promises were made to ensure effective implementation of the SDGs. President Mahama announced that a High-Level Committee will be established under his supervision.

“The Committee will be responsible for coordinating effective implementation of the SDGs in Ghana. It will receive technical support from the National Development Planning Commission,” he said.

Representatives from the National Development Planning Commission (NDPC) and the United Nations Development Programme in Ghana (UNDP) also made submissions in support of the implementation of the development goals. The chairman of the NDPC, Dr. Nii Moi Thompson shed some light on how the SDGs will be tied in with Ghana’s development agenda.

“The SDGs will be implemented by integrating the goals into the national 40-year development plan the NDPC is currently developing. The targets and goals of Agenda 2063 of the African Union will also be integrated into the long-term development plan”, he explained.

According to The UN Resident Coordinator, Ms. Christine Evans-Klock, the United Nations in Ghana will work closely with government and other stakeholders for effective implementation. She further explained that the UN system is currently developing a UN Action Plan for support to SDG implementation, as One UN, on collaboration with the National Development Planning Commission (NDPC) and the Ministry of Finance. 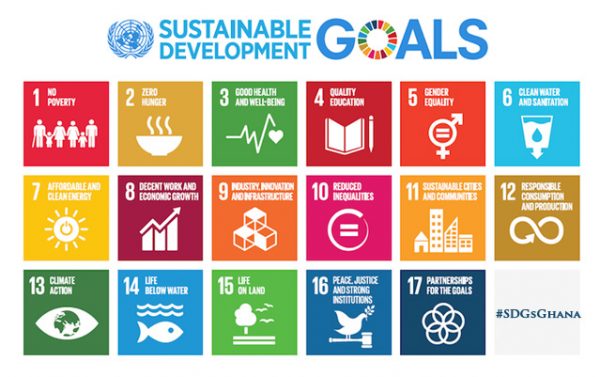 The SDGs succeeds the Millennium Development Goals (MDGs) which expired in December 2015. The MDGs was widely recognized as the most effective anti-poverty campaign in modern times. By building on lessons learned from the MDGs, the SDGs have the overarching aim to eradicate poverty by 2030 and ensuring that no one is left behind.

The President’s Address on SDGs was held in Accra and also had the aim of commemorating President Mahama on his appointment as Co-Chair of Eminent Advocates for the Sustainable Development Goals.

Participants also included the UN Under-Secretary and UNFPA Executive Director, the Minister of Environment, Science and Technology, the Minister for Education, representatives from the National Technical Steering Committee and representative from the diplomatic corps in Ghana.

The Media Foundation for West Africa (MFWA) is deeply engaged in SDG efforts in Ghana, including ensuring stronger coordination and more inclusive processes between various stakeholders. For further details on how to support our programmes and efforts, contact Project Coordinator Rikke Sig Hansen on +233 (0) 545 705 454 or rikke@mfwa.org.