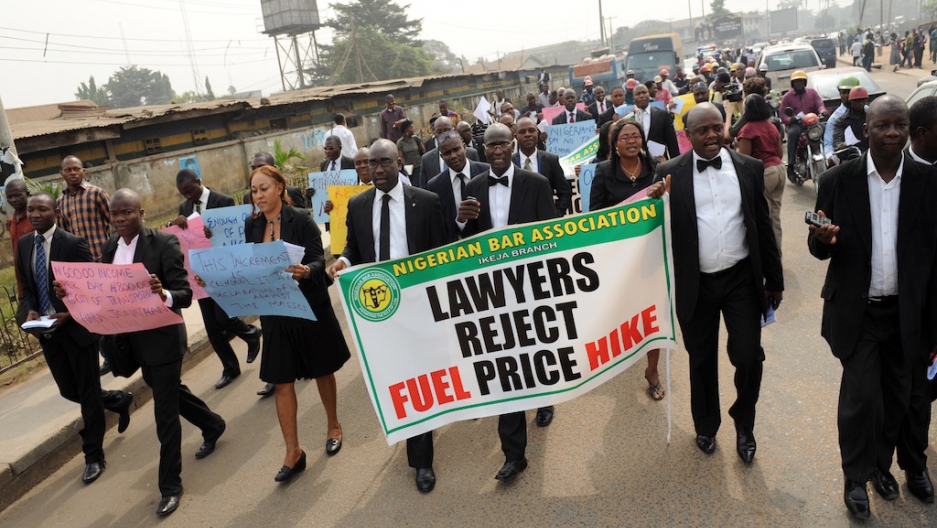 The Nigerian police in Lagos have arrested four journalists alongside 18 protesters in a crackdown on a crowd protesting against recent hikes in fuel and electricity prices on September 10.

The protest called by the Socialist Party of Nigeria (SPN) received a massive response as thousands of Nigerians turned out to express their anger at the recent increase in fuel and electricity tariffs in the country. The crowd was however dispersed by heavily armed police officers amidst arrests and physical assault.

The National Youth Leader of SPN Hassan Soweto, said gadgets belonging to some of the journalists were seized.

“We have just been arrested alongside several members of the Socialist Party of Nigeria and journalists for protesting this morning against fuel price hike, electricity tariff, and deregistration of SPN. I am typing this message at the back of a police van taking us to Area C, Police Command, Lagos,” Soweto, who is the National Youth Leader of SPN, announced in a tweet.

An activist, Towolawi Jamiu, tweeted, “The @MBuhari regime must stop repression against protesters agitating legitimately for their rights. The arrest of over 20 members of  @SocialistPartyN demonstrating peacefully today in Lagos by @PoliceNG is a breach of fundamental human right. We demand their immediate release!”

Another Nigerian with the Twitter handle, @edoyakulo, tweeted, “Was it a violent protest? If not, are the security operatives enjoying special rates of getting fuel for their personal use? Protests are an integral part of democracy.”

Also, Ismail Omotayo wrote, “The men of the Nigeria police today (Thursday) arrested reporters and peaceful protesters protesting against the hike in fuel price and electricity tariff in Lagos. The security personnel in Nigeria always behave cowardly when some brave fellows are trying to help them get a better live.”

A pressure group, Coalition for Revolution, described the journalists’ arrest as “yet another expression of the dictatorial nature of the Muhammadu Buhari regime. But what it fails to realise is that we have a rich history of vicious dictators like him, who end in ignominy despite all the might they wield at a time to repress and suppress,” the group’s co-conveners Gbenga Komolafe and Baba Aye wrote in a statement.

The police have however defended their action, saying that the protesters did not take permission to embark on the demonstration.

The Lagos State police spokesperson, Muyiwa Adejobi, confirmed that the four journalists were arrested and later released. He said the other 18 protesters arrested were charged to court, warned and discharged.

“The protesters were picked by police personnel in the Surulere area command. The four journalists were released, but others were taken to the task force base at Oshodi, and they were charged to court under Section 168 (1D) of the Criminal Law of Lagos State 2015. They were warned by the court and discharged. As we speak, we don’t have anyone in our custody.”

The MFWA condemns the excessive use of force by the police to break up the protest, which is legitimate means of expressing dissent by citizens. While the protest may not have been authorised, the police still owed it a duty to protect the protesters and the journalists covering it. The MFWA welcomes the discharge of all the protesters who were frivolously arraigned before court by the police. We urge the police authorities to take steps to ensure that such acts of aggression are not repeated in future by officers deployed to control protests.