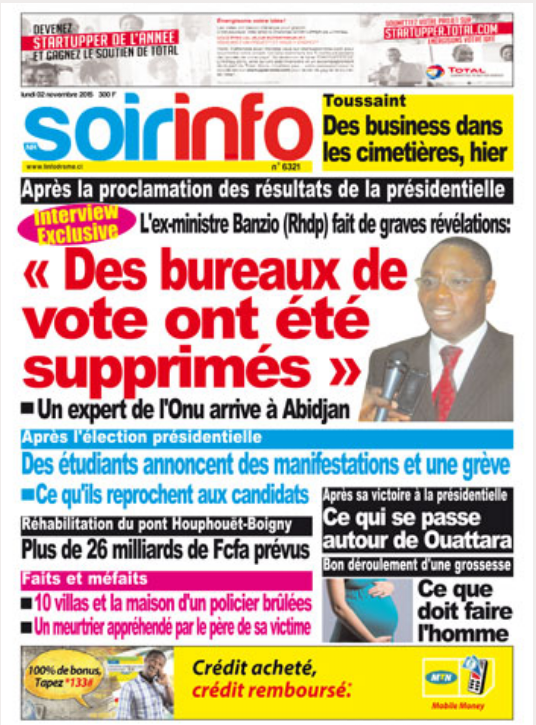 A group of angry youth attacked the home of the regional correspondent of an Ivorian independent daily Soir info in Dabou, a town in southern Cote d’Ivoire. The attack, which happened on October 30, 2015, followed what the assailants described as unfair reporting. They accused the journalist of filing reports that portrayed their community as a town still in turmoil.

According to the MFWA correspondent in Cote d’Ivoire, the journalist, Koffi Kouassi Norbert who writes under the pen name Norbert N’Kaka, narrated that the youth attacked his home shortly after he was summoned by the deputy Mayor of Dabou, Sessi Soukou.

According to the journalist, the deputy mayor was himself equally unhappy about his write ups. He said soon after he appeared before the deputy Mayor, a group of young people numbering about 50 went to attack his house.

“They broke my door and went inside. All my children are traumatised. But for the intervention of a neighbour, they would have locked them in and left with the keys. They then proceeded to my fish store, locked it and threw the keys away,” the journalist told the Agence Ivoirienne de la Presse.

Reports indicate that the youth are also demanding that the journalist be banished from the town.

The MFWA condemns the incident and calls on the Ivorian authorities to investigate the matter and bring the culprits to book. We also call on the authorities to offer the journalist the necessary protection to enable him continue with his journalistic work.