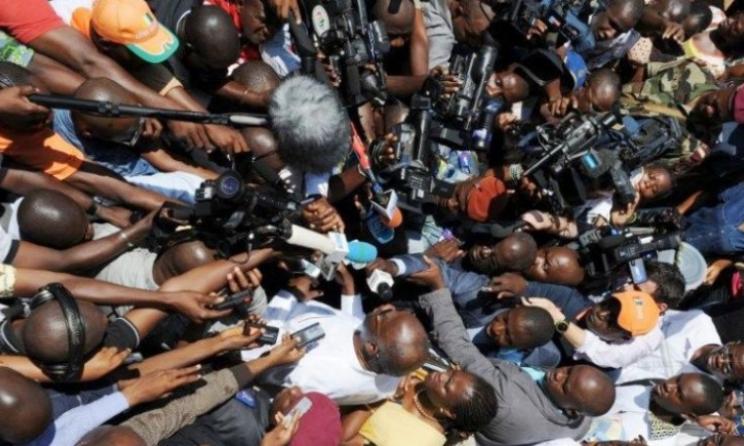 About 7.4 million voters in Niger are expected to cast their ballots on Sunday 27th December in a highly contentious presidential and legislative elections. The stakes are high since this year’s elections would mark the first transition of power in the history of the coup-prone former French colony.

The incumbent President Mahamadou Issoufou announced he is stepping down at the end of his second tenure in office in April 2021 in line with the constitutional limit on presidential mandates.

The presidential candidate for the ruling Nigerien Party for Democracy and Socialism (PNDS) Mohamed Bazoum, who is also a former minister of Interior and of Foreign Affairs, is considered to be the favourite among thirty (30) presidential candidates including Albadé Abouba, from the Patriotic Movement for Development (MPD), the Former President Mahamane Ousmane from the Democratic and Republican party, and Ibrahim Yacouba of the Nigerien Patriotic Movement (MPN).

The ruling party is keen on retaining power, while several candidates from the opposition created a coalition with several political parties in order to win the presidential seat.

Key among the issues defining this year’s election is the fight against terrorism. The country has since 2015 witnessed a spill over of extremist groups from neighbouring Burkina Faso. Other top issues likely to define voter’s choice on election day is the fight against perceived corruption in the military, especially with regard to procurement and social interventions aimed at curbing rampant poverty.

Against the foregoing background, the media has played an essential role in providing relevant information to the electorate. There has been increased coverage of the electoral process and topical issues on politics and the propositions of each candidate.

Ahead of the polls, the Media Foundation for West Africa (MFWA), conducted an analysis of the media landscape and has recorded several challenges plaguing the media industry including growing censorship, partisanship, and the fear of possible attack against the media during the ongoing campaign season.

Partisanship among the Media:

Following the democratic tide that swept across West Africa in the 90’s, Niger saw a resurgence of multi-party governance, and the adoption of provisions guaranteeing freedom of expression and of the press which paved the way for a burgeoning media landscape. From 1993 till date, Niger witnessed an explosion in the number of media outlets. Before 1993, there were only four media organisations in the country all of which were state-owned (radio Voix du Sahel, Sahel Television, and two newspapers Le Sahel, and Sahel Dimanche). Today, Niger has 130 newspapers, 16 television channels, more than 30 national commercial radios, and over 200 community radio stations.

As the election draws closer, the media landscape is reflecting the highly partisan atmosphere in the country, providing platforms for candidates to present to the electorate their diverse policies. Furthermore, there is an increase of debates on air analysing the key issues to be tackled.

Despite such a vibrant landscape, media organisations in the country are plagued by partisanship. The current situation shows an alignment of media organisations to political parties. Increasingly the media landscape in Niger is highly divided as some media organisations are aligned to the ruling party while some are aligned to the opposition. This is mainly because some politicians fund some media outlets or are the sole owners. For example, the MFWA sources revealed that the Anfani media group is owned by the opposition Member of Parliament and presidential candidate Grema Boucar while the Dounia media’s main shareholders are supporters of the ruling party.

The situation has turned media houses during the on-going campaign into the mouthpiece of political parties funding their operations. The state-owned media is also mostly aligned with the government.

“They are not with us” has become a widely used expression by politicians to refer to a specific media organisation in Niger that is not aligned to their party.

In an electioneering year, the media plays an indispensable role by projecting the strengths and weaknesses of the candidates, the government, and the electoral management body, and informs the public on how each of the stakeholders are performing. This role of the media can influence voters’ turnout and affect the chances of a candidate in winning or losing the election.

During the on-going campaign, the media landscape in Niger has increasingly witnessed opposition media organisations heavily criticising the ruling party, with media outlets aligned to the ruling party also being very critical of the other side. The editorial line of a media house depends on whether the party that finances it operations supports the ruling or is part of the opposition party.

“Ibrahim Yacouba, who is currently a presidential candidate, and a Member of Parliament in the opposition, is the owner of Niger 24. He used to be part of the ruling party and occupied varied positions in the government including deputy chief of staff at the presidency. When he left the ruling party in 2018 due to some misunderstandings, the editorial line at the media automatically changed from praising to criticising the government” said an anonymous source.

The situation has led to a spike in censorship among media organisations. Sources of the MFWA revealed that editors at some media organisations aligned to a specific political party have sometimes ask their reporters not to publish some reports which could negatively affect the candidates from the party that finances their operations.

The sector has thus fallen victim to “media capture” where media organisations are not autonomous in their operations and are influenced in their reportage by their funders or advertisers. Some media organisations in Niger are often scared of losing their source of funding and could be subjected to financial bullying as parties funding them could threaten to withdraw funding or advertising contracts to restrain them from reporting some issues.

Some experts believe that the situation is due to the financial weakness of media organisations and journalists. In Niger, most journalists work without contracts and receive wages lower than the minimum salary which is 35000 CFA (USD64). For the past five years, media professional unions and the Ministry of Communication have been calling on media owners to sign a collective agreement which would guarantee minimum wage for reporters, however limited progress have been made. The poor wages received by journalist make them easy targets for politicians seeking to promote a specific agenda.

Fear of Attacks on journalists

Freedom of expression and of the press is essential for a vibrant democracy and credible elections. A free and independent media industry represents the backbone of democratic governance. During an electioneering year, these rights become more important since the media assesses the incumbent government’s policies. A climate in which press freedom is infringed upon stifles the media from effectively carrying out its watchdog role to adequately inform the electorate.

As the campaign ahead of the election gains momentum and debates among stakeholders are getting tense, media professionals working in highly partisan outlets have expressed fears of possible attacks from militants of other political groups.

Reports indicate that journalists in media houses aligned to the opposition do not dare attend rallies or programmes organised by supporters of the ruling party and vice-versa.

In January 2015, during a public demonstration organised by the opposition, law enforcement officers and some party militants attacked four media houses allegedly close to the opposition and Radio and Television Ténéré was ordered to suspend its programmes.

Memories of the event have resurfaced during the current campaign season and the fear of being attacked by militants from some political parties looms on the media landscape in Niger.