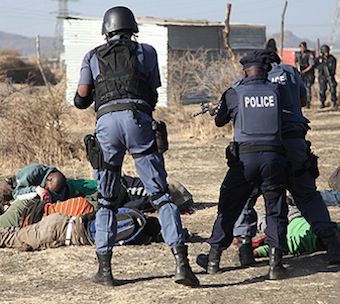 September 2018 recorded nine freedom of expression violations in four countries, an otherwise relatively quiet month that was disturbed by two killings in separate incidents in Guinea and incidents of wanton physical assault on journalists.

On September 5, 2018, two people aged 17 and 25 were killed when security forces used live bullets to disperse demonstrators in the Guinean cities of Boke and Kamsar who were protesting against water and electricity cuts.

Two days before the bloody crackdown in Guinea (September 3), a gendarme physically attacked a reporter from Le Quotidien at a court premises in Dakar, Senegal.

The gendarme, who spotted the journalist, Mamadou Sakine, filming his (the gendarme’s) earlier aggression against a woman, seized his phone. When Sakine protested against the seizure, the security officer gave him a head-butt, opening a deep cut on the journalist’s upper lip.

On September 22, an officer with the Police Intervention Unit of Gambia assaulted Bubacarr Manga, a cameraman with Eye Africa, an online TV station.  The media professional was slapped while covering a meeting organised by a group of teachers in Abuko, southwest of the capital Banjul.

In a statement, the Gambia Press Union (GPU) said Manga’s identity as a journalist could not be mistaken because he “was standing next to his big camera and big tripod and was wearing his press badge around his neck.”

On September 29, vigilantes of the ruling Sierra Leone Peoples Party (SLPP) assaulted John Koroma, editor of the Awareness Timesnewspaper while the journalist was covering a bye-election at Mile-14 Town in Tonko Limba.The thugs, who accused Koroma of being anti-SLPP, meted out the assaulted by in the full glare of the police and the Chairman of the SLPP.Koroma’s phone and note pad were also seized.

In Ghana, staff of a gold dealership firm, Menzgold, physically attacked two journalists at the company’s branch at East Legon in Accra on September 12. The journalists were interviewing customers who had besieged the company’s premises to make panic withdrawals following a shutdown directive from the regulatory body for the sector, the Securities and Exchanges Commission.

Three workers citing unauthorised taking of photos, shoved Karen Dodoo of Joy News in the shoulder, before snatching the journalist’s two phones and the microphone she was using.

The TV3 reporter, Nana Akua Mensah Aborampah, was grabbed by the wrist and pulled away into the offices before being released moments later.

On September 17, officials of Niger’s revenue service, Direction Generale des Impots (DGI), backed by the police, ransacked the offices of three media organisations and carried away valuables including computers, printers and generators and fridges. The affected media organisations were Les Courriers, Le Canard en Furieand Le Monde d’Aujourd’hui. The operation was part of the DGI’s clampdown on media organisations that had defaulted on their tax obligations.

On the other hand, there was some good news as Radio and Television Labari finally reopened on September 13, 2018 after 44 days of closure. The media organisation thus, became the last to resume operations following  the  mass closure of media houses by Niger’s revenue service over accumulated tax arrears in July.

In what was a major redress action, a court in Nigeria on September 13, awarded compensation in the sum of 10 million Naira (about US$27,500) to Jones Abiri, describing the journalist’s two-year detention without trial as an “outright conviction.” The court subsequently threw out the case the country’s security agency, the Department of State Services, (DSS) against filed against the journalist.

This followeda suit filedbyHuman rights lawyer and activist, Femi Falana,  on July 3, 2018 against the DSSfor the arbitrary detention of the journalist.