Fifty influential media organisations across the West Africa region are partnering the MFWA for this year’s West Africa Media Excellence Conference and Awards (WAMECA 2019). The media outlets which are made up of radio, TV, online and newspapers are contributing to highlighting the event in their respective countries through various forms of publicity.

“We are excited at the increase in media partnership for WAMECA this year. Indeed, this is a demonstration of the rising impact and recognition the event is gaining across the West Africa region. The MFWA remains committed to rewarding outstanding journalism and inspiring media professionalism,” said Abigail Larbi Odei, Programme Manager for Media and Good Governance.

WAMECA 2019 is scheduled for October 17-19, under the theme: Social Media, Fake News and Elections in Africa. The event will be held at the Swiss Spirit Alisa Hotel in Accra, Ghana.

On Thursday and Friday, 17th & 18th October, 2019, the Conference will bring together journalists, media professionals, editors, academics, freedom of expression advocates, diplomats and the business community in West Africa to deliberate on how Social Media and Fake News are impacting Elections in Africa. The following day, Saturday, 19th October, outstanding journalists whose stories are impacting society will be recognised and honoured at the Awards ceremony.

The media outlets are as follows: 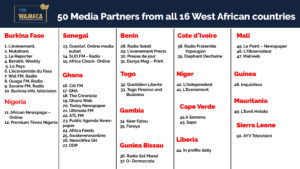