Mainstreaming the role of the media in ECOWAS: Policies and practices 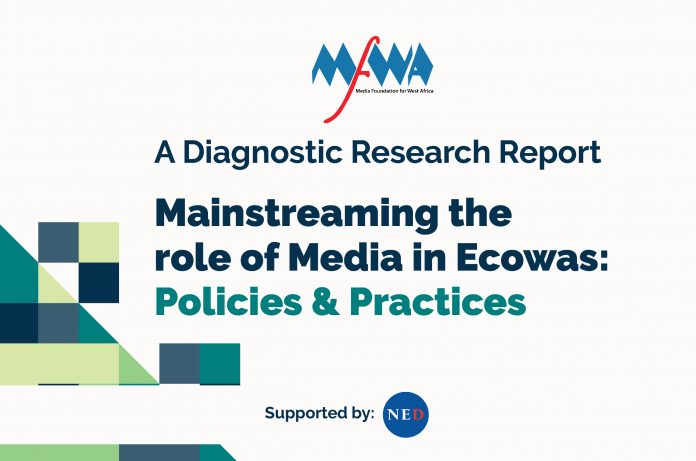 The Economic Community of West African States (ECOWAS) has over the years adopted protocols aimed at achieving the aspirations of populations in West Africa. Such protocols often involved the media and aimed at giving them important roles in improving democracy and fostering peace and security.

For instance, Article 1 (k) of the Protocol on Democracy and Good Governance creates a conducive environment for media operation while Article 60 of the ECOWS Conflict Prevention Framework seeks to create an enabling West African information landscape of freedom, transparency and accountability, where the electronic and print media becomes veritable watchdogs of human security, and platforms for mobilization and discourse on the processes to promote human rights and the rule of law, common citizenry, social cohesion and integration, social harmony, democracy and development.

But in a recent mapping exercise conducted by the Media Foundation for West Africa (MFWA) on the extent to which media is prioritised in democratic interventions undertaken by ECOWAS, respondents say ECOWAS’ engagement of the media has been passive, inconsistent and occasional. According to them, ECOWAS sees the media as more of an agent for information relay than allies in the promotion of democratic governance in the region.

Investigative journalism, the RTI law and the fight against corruption in Ghana: reflections from a stakeholder forum in Accra

Impact of the shrinking space on the media and citizens: key trends and actions required