West AfricaSafety of Journalists
May 3, 2019 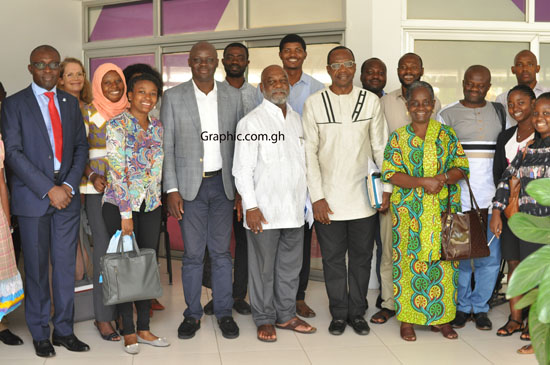 Media Stakeholders in Ghana have called on government, security agents and media owners to prioritise and promote the safety of journalists in a communique issued at the end of a Stakeholders’ Dialogue on Safety Journalists in the country as part of efforts to empower the media to play its constitutionally-mandated watchdog role effectively.

The Media Foundation for West Africa (MFWA) and the Ghana Journalists Association (GJA) jointly organised the Stakeholders’ Dialogue on Thursday, May 2, 2019, to mark this year’s World Press Freedom Day.

The Stakeholders’ Dialogue brought together representatives from government agencies, state security agencies, media groups, journalists, civil society organisations and academia to deliberate on, and offer solutions to the rising spate of attacks on journalists, media workers and media organisations in Ghana.

The meeting also witnessed presentations and remarks from key stakeholders in the media landscape in Ghana including Prof. Kwame Karikari, Founder and Board Member of MFWA and Dean of the School of Communications, Wisconsin University, Ghana and Ambassador Francis Tsegah, Senior Research Fellow, Center for Democracy and Development (CDD).

In a communique issued at the end of the meeting, the participants called on government to demonstrate commitment to fighting impunity by demanding and ensuring effective investigations into assault cases against journalists and media workers to facilitate the prosecution of such violations.

The communique also called on media owners to establish protocols on safety and security for their media houses, including the provision of appropriate safety tools and proper equipment for their staff, particularly reporters.

Security agents were charged to also expedite investigations into violations against journalists, media workers, and media organisations by their officers and sensitise them to appreciate the work of the media in democratic societies.

Access the full Communique on Safety of Journalists here.