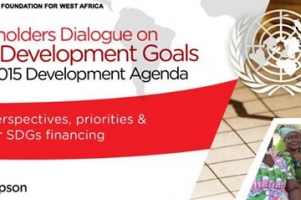 Key national stakeholders will meet at a National Stakeholder Dialogue in Accra on April 21, 2015, to discuss Ghana’s position and priorities on the 17 proposed Sustainable Development Goals (SDGs). The meeting is expected to identify and document Ghana’s position on the proposed SDGs, its post-2015 development priorities and options for financing implementation. The meeting also seeks to increase national conversation on the long-term development strategy for Ghana and inform the intergovernmental negotiations at the UN level.

The National Stakeholder Dialogue will be chaired by the Director General of the National Development Planning Commission, Dr. Nii Moi Thompson and will have representation from institutions such as the Office of the President, the Ministry of Finance, the Ministry of Foreign Affairs, Ghana Statistical Service, ISSER, Civil Society and the Ghana Trades Union Congress.

The dialogue forms part of the National Conversation on the Post 2015 Development Agenda Project which is being implemented by the Media Foundation for West Africa (MFWA) and SEND-GHANA with funding support from the New Venture Fund.

The Country Director of SEND-GHANA, George Osei-Bimpeh, noted that Ghana was part of the Open Working Group developing the proposed development goals and has thus already influenced the process of defining the post-2015 development agenda. He was however worried that a cloud of uncertainty still hovers around what the key priorities of Ghana are and how they will be aligned with the national development agenda.

The Executive Director of MFWA, Sulemana Braimah, for his part regretted that till now there has barely been any public conversation on Ghana’s position on the post-2015 development agenda and many citizens and stakeholders are not even aware that we are in the process of defining global development goals for the next 15 years. “It is crucial that Ghana as a country prioritises what should be implemented of the post-2015 development agenda, given that countries can set their own priorities within the broader development goals”, Sulemana Braimah, added.

Ghana is currently part of the intergovernmental negotiations on the proposed 17 SDGs taking place at UN level. The entire process will soon climax with the adoption of the final post-2015 development agenda by the UN General Assembly at a Summit in New York, September 25 – 27, 2015.